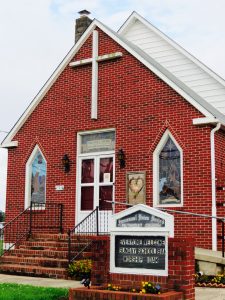 Immanuel Union United Methodist Church is been serving its Cheswold Community for over 100 years.

Primarily a Native American Lenni Lenape community, it is now beginning to transform its worship to an all-inclusive forms of Christian Worship at the same time it is reaching out to the younger population to lead them to and ignite in them the fire of God and passion for the Gospel of Jesus Christ. We celebrate in contemporary worship the third Sunday of each month.

Manship Methodist Church had its origin around 1830 when a church was built near the present site and was called “Suttons Meeting House.” This was perhaps a “Mission Church” established by immigrant Methodists among native tribes in sixteen states between 1819 and 1841. Sutton’s family members were likely from the Lenni Lenape Tribe (translated as the “original People“), which populated most of present day Delaware, New Jersey, Eastern Pennsylvania. On December 28, 1844, John Miller donated land to the meeting house. In 1876, a new building was erected and the name was changed to Manship Methodist Church. On March 1, 1886, land was purchased by the trustees of Manship to increase the boundaries of the adjoining cemetery. Our oldest gravestone, Greensbury Beckett, is dated 1865. In 1890, the church was remodeled and the present sanctuary was created. On December 22, 1892, the trustees of both churches purchased a “lot” of land in Cheswold’s “four hundred” from David and Mary Hoar for a parsonage. From 1890 until 1947, the two churches continued to struggle as many of the “country” Methodist churches did. On April 7, 1947, a joint official board appointed a six members committee to draw a proposal for unification. With the prayers and leadership of Rev. Randolph Fisher, it was resolved that Manship Methodist Church and Little Union Methodist Church shall be united as one church, and the name shall be Immanuel Union.

The regular worship services were to be held at the Manship Church In 1951, the church was relocated to its present site with a basement added. In 1968, a social hall was added with modern facilities. Segregated Methodism would continue until 1965 when the Peninsula Conference merged with the Delaware Conference and Immanuel Union joined the Cheswold Charge. In 1968, the Methodist Church merged with the Evangelical United Brethren Church thus creating the “United Methodist Church.” In 2001, seven stained glass windows were added: The Nativity to the Resurrection.

We have been a congregation of Native American Christians for over 180 years. We are continually searching the past for our heritage and our culture. Many of our families have seven generations devoted to Immanuel Union.